Just updated my google map. its not 100% compleate but with over 35 examples in the Ithaca, NY area and few outside it’s not so bad. What has been excluded is the many examples found under porches and paint in Ithaca, NY. Those examples really stain the eye. The map also does not include places where evidence is not aparent but architecturally would make sense to have tuckpointing. This is based on the facade and time of construction. There are other building in Ithaca, NY that more than likely had Tuckpointing (Bordman House) but were only repointed last century.

Tuckpointing Examples and where to find them

Even when masonry is not the focus of buildings architecture, the necessity of a chimney provides an opportunity for high quality details to be carried out. In this case Tuckpointing was well executed on the brick chimney. While this expression of the masonry craft is a little tarnished, details are still well preserved on under the eaves, where protection from the elements is greatest. Take note that on the face of the chimney with the greatest exposures; the tuckpointing is nearly completely gone, leaving behind only the unifying red colorwash. This gives a muted appearance and an undoubtable suggestion that perhaps the best approach to “fixing” this artwork is to simply paint it red, as was once done in the past to the section above the roof line. Such practices can accelerate decay by causing excess moisture to be trapped in the masonry units (i.e. Brick) and lead to spalling and of course peeling paint.

Also not if you zoom in closely, there a small amount of tuckpointing on the stone Foundation 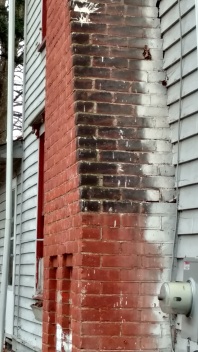 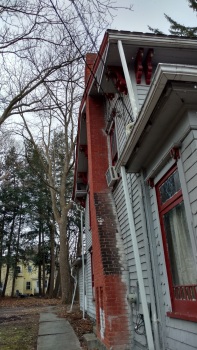 Last summer in 2015 Randy Ruth worked with Historic Ithaca to through its Work Preserve program, and collaborated with Friends of Ithaca Cemetery to bring two pairs of youth volunteers to help repair nearly 40 various monuments. Ithaca Journal ran an article about the restoration campaign.

You can read about it here…

The work done on this foundation is far from being in great condition or of the highest caliber. However, that doesn’t mean it should get a mention and be recorded. Here some photos from the west facing elevation of the foundation. It should be noted that there was nothing noticeably preserved on the east side. However, there is clear evidence of black stopping mortar that has weathered relatively well. 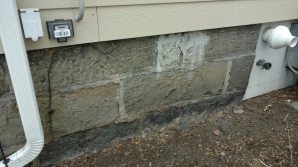 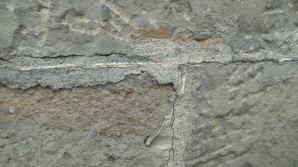 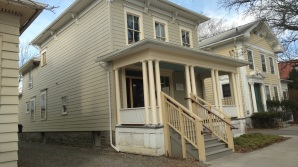 This building caught my eye, in part due to a recent addition to the opposite side of the building in the photo. After a bit of research, it became evident that this was the home of John Snaith. He was a local builder / Architect / contractor and tradesman from England, was originally in town to do work at Llenroc. Some of the projects he worked on in Ithaca show examples of brick Tuckpointing and 1st rate stone work. A great example is at 405 S. Albany St. (Will showcase at a later date). I believe Snaith along with classically trained architects like Charles Babcock and William Henry Miller, often used Tuckpointing on their structures where possible. So it should be of no surprise that the house John Snaith built for himself would showcase this technique

Now I know I only have one photo of this example but I do plan on going back and writing a part II on this one, so hold to your hats. Until then you can focus on the photo along the roofline above the porch, where a patch exists about 4ft wide and 1.5ft high. Or better yet take a look at this detail for yourself next time you go by.

Here is an example of some Tuckpointing done on the stone foundation of an INHS owned building at the corner of N. Plain St. and Seneca St.

While it might not obvious at first this work was meant to simulate well cut Ashlar stonework. What is interesting here is use of a straightedge to produce crisp 90° angles and sharp straight ribbons. Also, the work done here is not a crisp bead as in other examples but more of a true flat ribbon, which is more akin to tuckpointing associated with brickwork.

With this level of decay only a small portion of the original article is left behind and is clearly in need of a repointing campaign, and should be finished in a true tuckpointed finish. 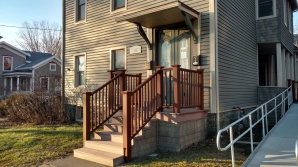 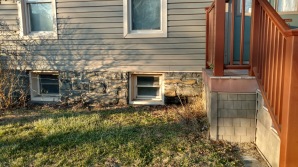 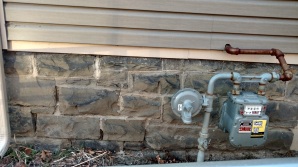 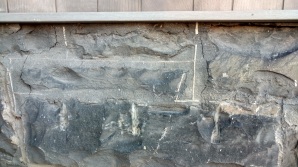 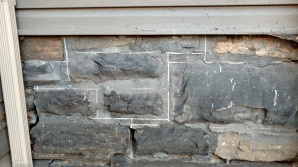 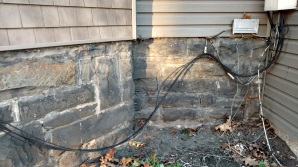 This was something I wanted to get to a long time ago but didn’t get around to. Simeon’s On the Commons shows evidence of Tuckpointing on its N Aurora st. facade. With the rebuild underway I am not sure if this section will be repointed, cleaned or otherwise remove the evidence of a once tuckpointed building or not. Either way, here are some photos from during the construction. one has been altered with highlights to see where it remains. hopefully at some point I can get a closeup prior to any work being done.

This will be an ongoing project, show casing examples of various forms of Tuckpointing. the root of this project will be based in Ithaca, NY but when possible I will try and incorporate other examples in the central NY region.

For today, here are some pictures from next door to Gimme Coffee at N Cayuga and Cascadilla streets.

This past Memorial Day at Ithaca City Cemetery a great turn out of volunteers appeared to help clean and preform some maintenance. I can’t confirm the total number but from what I gathered it was near two dozen people who came and went, over the three hour morning volunteer period. Most of the time I spent was working on resetting a small obelisk about 3 ½ feet tall. The limestone base was in three pieces with the marble socket completely detached. The base stone was mortared together with a neat roman cement and the infilled with a pigmented roman cement to match the host base stone, to provide stability to the marble socket. The repaired base stone was leveled in gravel and sand. The marble socket was set with a Natural Hydraulic Lime 3.5 mixed with marble aggregate, on top of the base and then the obelisk set in the same mix. The color of the patch looked good after completion but I checked it a week later and it is indistinguishable from the host stone.

Check back soon for more photos to see how the patch has cured to match and the application of D/2 Biological Solution has cleaned up the marble.